We believe… in God, who has revealed Himself in three distinct persons: Father, Son and Holy Spirit.

We believe… in the Bible as God breathed, inerrant and infallible, as given in the original writings and that the Scriptures are the final authority in matters of faith and doctrine.

We believe… in man as being created by God, bearing the image of God and being accountable to his creator for his behavior.

We believe… in the existence of sin, which results in alienation and separation from God and which leads to spiritual death unless covered with the blood of Jesus.

We believe… in salvation by grace through faith in Christ that leads one to obey the gospel of Christ and walk in His teachings.

We believe… in the resurrection from the grave: that Jesus rose from the dead and that all will be called forth from the grave and judged upon His return.

We believe… in heaven, a place that is being prepared for the faithful in the presence of God, Christ and the Holy Spirit, which is the eternal home of the spirits of just men made perfect.

We believe… in hell, a place of everlasting torment prepared for the devil and his angels, which is the destiny of all whose name is not found written in the Book of Life.

We believe… in worship that is directed to God and which, to be accepted, must be offered sincerely from the heart according to the pattern established in God’s Word.

We believe… Christ is the divine Son of God and that He was born of a virgin, being supernaturally conceived in her womb by the Holy Spirit.

We believe… Satan is a real, personal being who is the archenemy of God and mankind.

We believe… in baptism by mature, responsible individuals for the remission of sins and that the appropriate mode is by immersion.

We believe... the leadership of a congregation is to be exercised by scripturally qualified male members.

We believe… the Holy Spirit indwells believers at the point of baptism and remains as an earnest of the final inheritance that will be in heaven. 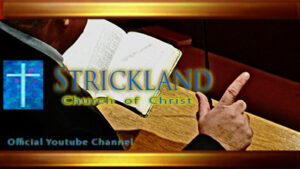 Live Streams of Sunday Morning Worship and Wednesday Night Adult Class are available on YouTube. Just click on the graphic above or
CLICK HERE
Sunday Morning Worship  is now open for regular attendance with social distancing. Please refrain from all physical contact including shaking hands and hugging. Masks are encouraged and available for free in the lobby.